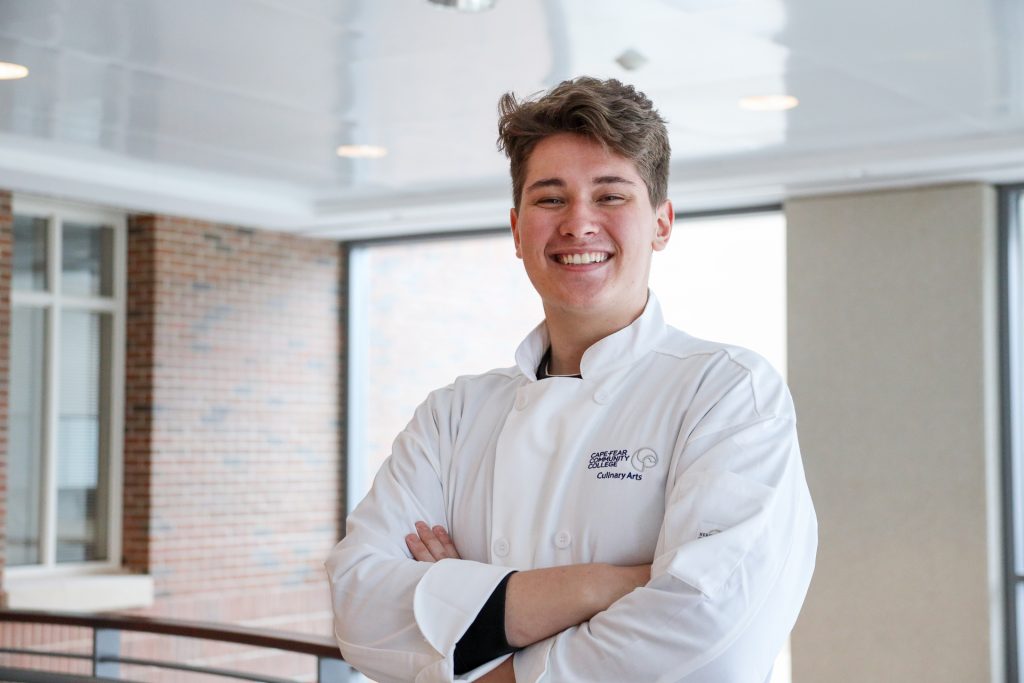 “No one is born a great cook, one learns by doing.” Julia Child. And that’s just what Dylan Rhodes did.

Dylan Rhodes, 18, found all the ingredients for a great education at Cape Fear Community College and managed to land his dream job before graduation!

As a homeschooled high school student, Rhodes took advantage of CFCC’s Career and College Promise Program (CCP) and enrolled in college-level courses his junior year, positioning him to earn an associate degree just a year after his high school graduation.

“Not only is the Career and College Promise program allowing me to graduate with my associate degree a year after high school, but it saved me a lot of money,” said Rhodes. “Now I’m heading into the working world with no debt.”

While Rhodes’s passion for cooking was evident to his friends and family, it wasn’t until his job at Kornerstone Bistro, a local favorite, that he fell in love with the art and knew he wanted to pursue a degree and career as a chef. Aware of the culinary arts technical training program at CFCC, Rhodes enrolled in the program.

“CFCC’s class format focused on both the production and serving of food, which gave me the practical hands-on training that I can use working in a restaurant.”

Rhodes worked while in school, which allowed him to apply and expand upon his learned skills practically. He treated his job as more than just a way to earn a paycheck. “Whenever I’d meet the people I’d be working with, I told them that I was treating working like school. I looked at it less like earning money and more like building a career,” said Rhodes.

Through his hard work and networking, Dylan discovered career opportunities at award-winning restaurants on Blackberry Farm, one of America’s most celebrated luxury resorts. After an extensive interview process, Rhodes walked away with two different offers.

After his May graduation, Rhodes will start his dream job at their new restaurant, Three Sisters, an extension of the Blackberry Farm property— Blackberry Mountain.

“I am so proud of Dylan for pursuing this dream job at Blackberry Farm,” said one of Dylan’s culinary instructors at CFCC, Gwen Gulliksen. “It will be a life-changing experience for him and I’m glad to have helped him in any way. He has a true passion for the culinary arts and I see great things for him in his future.”

“It is so inspiring to see Mr. Rhodes not only excel in his studies at CFCC but pursue his passion and take a step toward achieving his dreams while doing so,” said CFCC President Jim Morton. “His success should largely be attributed to his great determination and focus and can serve as an inspiration to everyone that their dreams, too, are within reach!”

To those looking to pursue their dream job through CFCC, Dylan had a few pieces of advice. “Take all of your classes seriously, even the ones you find boring. Work at the same time you are going to school. Go to work and tell them that you’re there to learn. They’ll treat you differently and anyone that has advice will always be giving it to you. There isn’t a single thing I could take away from Cape Fear that I could not use. You’ve got to stay focused on what you and where you want to be. Just decide where that is and make it happen.”