From Marine to Medicine

After completing her military commitment in Camp Lejeune, Burten chose CFCC to earn transferable college credits before returning to her home state of Texas where she plans to earn her bachelor’s degree, then apply to medical school. As a veteran from Texas, Burten can combine her GI Bill® along with the Yellow Ribbon and Hazlewood Acts of Texas to help pay tuition for her undergraduate studies as well as medical school. As Burten likes to tell it, she will be “the first doctor to graduate without any student loans.” 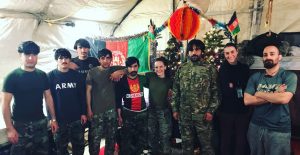 Burten’s passion for medicine amplified during her tour of duty in Afghanistan where she assisted medics in the field and filled in as an interpreter for Afghan citizens. Burten speaks not just one, but three Afghan languages: Farsi, Dari, and Pashto.

Before deploying overseas, Burten was stationed in Monterey, California where she enrolled in the Language Institute. Studying full time with native speaking instructors for a year made her fluent in Farsi and Dari. And helped her later pick up Pashto.

This immersion into language education inspired the topic for one of Burten’s English essays. In the essay, she describes the advantages of bilingual education and the benefit of introducing languages in early education. She summarizes her argument:

“The future of our country depends on how well we adapt to internationalization. Our people must understand the significance of communication in our ventures for wealth, success, peace, and community. With the use of language and cultural understanding, we could avoid political misunderstandings, decrease casualties of war, increase the success of our businesses and work together in the fields of education and research to understand information and one another on a deeper level.”

Throughout her essay, Burten shared times she’s utilized her second language skills here in the United States: Having a casual conversation with a recently immigrated taxi driver, providing a foreign traveler with directions, and helping the Fort Worth police department rescue a family from a house fire. Without her ability to translate for the mother, the first responders would not have understood the children were inside the home.

“Language education is more than knowledge and rote memorization, it is a door to be opened to understanding the people of the world.”

Impressed by Burten’s essay and experiences, English instructor, Blythe Bennett, extended an invitation to Burten to join the International Club. Burten hopes that through this club, she can “raise cultural awareness and increase students’ understanding of other cultures.” 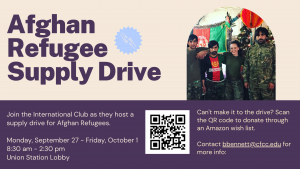 Burten encourages all students at Cape Fear Community College to get involved on campus. Her activity with the Student Veterans Organization and the International Club has given her the opportunity to bring her compassion for Afghan refugees to CFCC by facilitating a donation drive with the International Club. The club is collecting clothing, toiletries, and other personal items many refugees are forced to leave behind. A collection table will be set up in the lobby of Union Station on the Wilmington campus through Oct 1, 2021.