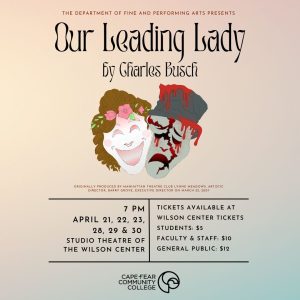 “Working on “Our Leading Lady” as the assistant director has been very eye-opening for me. Not only have I had the opportunity to dip my toes into the director world, but I have also learned so much from this play,” shares CFCC Theatre student Emma Fullen. “I have also learned about Lincoln’s assassination and how the actors who performed for him were implicated in his murder. It’s so interesting to see what was actually going on behind the scenes.”

“I have known for a long time that an actor assassinated Abraham Lincoln while he was watching a play. Though I never considered how the assassination impacted the actors performing for him that night,” adds CFCC Theatre Program Chair Jessica Gaffney. “This play allows both me and my students to examine the lives of the very real people who performed on that ill-fated evening at Ford’s Theatre.”

About “Our Leading Lady”

Set in April 1865, Laura Keene, a famous actress/manager, performs in Washington, DC during the week the civil war ends. Despite a madcap scramble of backstage squabbles, the ambitious Laura does everything she can to get President Lincoln to attend her closing night performance. Her great plans go awry, as Laura and her theatrical troupe collide with history as a certain member of the famous Booth family interrupt the performance.

Tickets for this performance cost $5 for students, $10 for CFCC faculty and staff, and $12 for the general public. Tickets can be purchased online at wilsoncentertickets.com .