CFCC offers a variety of student clubs and activities that allow students to connect and explore their interests and hobbies. The Feminist Alliance Club brings students together to work toward equality.

According to the Encyclopedia Britannica, feminism is the “belief in the sexes’ social, economic, and political equality.” Contrary to popular opinion, feminism did not start with the women’s liberation movement in the 1960s. Feminists have been fighting for equal rights for centuries.

As far back as the 3rd century BCE, evidence suggests that Roman women protested laws restricting their use of expensive goods. In American history, women’s suffrage began before the Civil War and continued until the 1920s when the 19th Amendment was ratified, giving women the right to vote. Today, celebrities like Beyonce, Emma Watson, and Angelina Jolie have been outspoken feminists.

Who Is a Feminist?

Feminists are not exclusively women. Anyone can be a feminist if they share the same belief about equality. Truly, anyone who actively supports equality is a feminist.

CFCC faculty member Yuna Shin established The Feminist Alliance Club in 2017. She has been a full-time German instructor at CFCC since 2012. Shin earned a master’s degree in German from the University of California at Irvine and another from Princeton University. The latter focused on feminist literary theory, which led Shin to teach women’s studies at CFCC.

After two students in Shin’s women’s studies course approached her with a request to set up a place where they could meet and talk, Shin realized the need for students to share what was on their minds. To fulfill this need, she founded the Feminist Alliance Club, where all students have a safe space to gather and start conversations about how to resolve the issues around sexism.

“Club members meet weekly to talk about things on their minds,” Shin said. “Sometimes students will share something that happened, but they don’t know how to process it. We will process it here.”

The Family of ISMs

Sexism is not the only issue the Feminist Alliance Club tackles. Students also examine issues regarding racism and heterosexism, highlighting areas where awareness is needed.

“In this group, we answer hard questions about issues that may feel awkward to discuss with our families,” shares current club member. “This is a nice space to meet people and talk about things that others may resist discussing.” 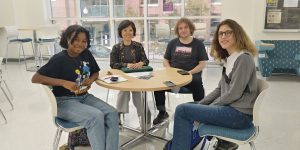 The Feminist Alliance Club welcomes all students to join and bring their thoughts, questions, and concerns to a secure environment where they can openly explore issues and resolutions.

“We’re not in a post-feminist or post-racial era,” explains Shin. “Those things still exist, so we want to bring it to people’s awareness that there are things that need to be worked on.”