During the state’s shelter-in-place executive order, salons and fitness centers were not the only businesses closed to the public. Live stage performances also took a long intermission. Cape Fear Community College student Jordan Dively decided the pause was the perfect opportunity to hone her skills in theatre arts.

Before the pandemic, Dively worked as an assistant stage manager for the Shakespeare-inspired Quill Theatre in Richmond, VA. Like many members of the performing arts, she found herself out of work. Although she has her Bachelor’s degree in history, Dively fell in love with the theatre and knew she wanted to continue her career in stage management.

After a bit of research, Dively found CFCC’s Fine Arts – Theatre program. She considered other community colleges between Wilmington and Richmond, but no college had a program that compared. At CFCC, there are two theatre tracks of study: acting or technical. Dively is on the technical track, where she is learning the techniques of stage management, sets, costuming, and stage props.

Giving Props to the Props Master

This semester, Dively is excited to display her skills as a props master in the upcoming student performance of “These Shining Lives” by Melanie Marnich. The play is based on the true story of the Radium Girls of the 1920s , a group of female factory workers who suffered dire health consequences by painting watch dials with glow-in-the-dark radium paint.

Dively has enjoyed crafting some props, such as a vial of glowing radium paint made of fluorescent green epoxy resin. 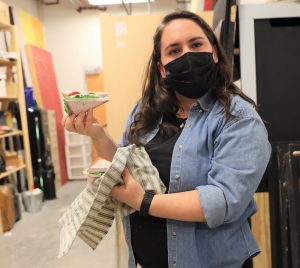 A turkey, tomato, and lettuce sandwich is made from sponges, clay, and fake lettuce from a craft store. “All the instructors have been nice, and the classes have been fun,“ said Dively. “I have even learned how to use power tools.” She also curated period prop pieces, including a clock, a picnic basket, and a small wooden box containing an uncomfortable sight: bone fragments. Dively purchased some of these items from online stores. Some props were leftovers from previous productions.

In December, Dively’s role will shift to stage manager for the next production, “A Charlie Brown Christmas.” She appreciates the variety of tasks and receiving hands-on training in all aspects of stage production.

“Everybody is always willing to help everybody out,” Dively explains. “We all have a common goal of putting on the best production possible. So every production member is focused on that objective.”

After graduation, Dively will be seeking employment with a theatre company.  Between the film industry and local theatre, Wilmington offers plenty of job opportunities in the performing arts. According to the Bureau of Labor Statistics, theater production roles such as talent agents, directors, producers, makeup artists, costumers, and stage managers are among the fastest-growing jobs between 2020 and 2030.

Housed in the Wilson Center, CFCC’s Associate in Fine Arts in Theatre program allows students to direct the focus of their own theatre education by giving them the choice to study either performance or technical theater.

For performance dates and tickets for “These Shining Lives,” visit Wilson Center