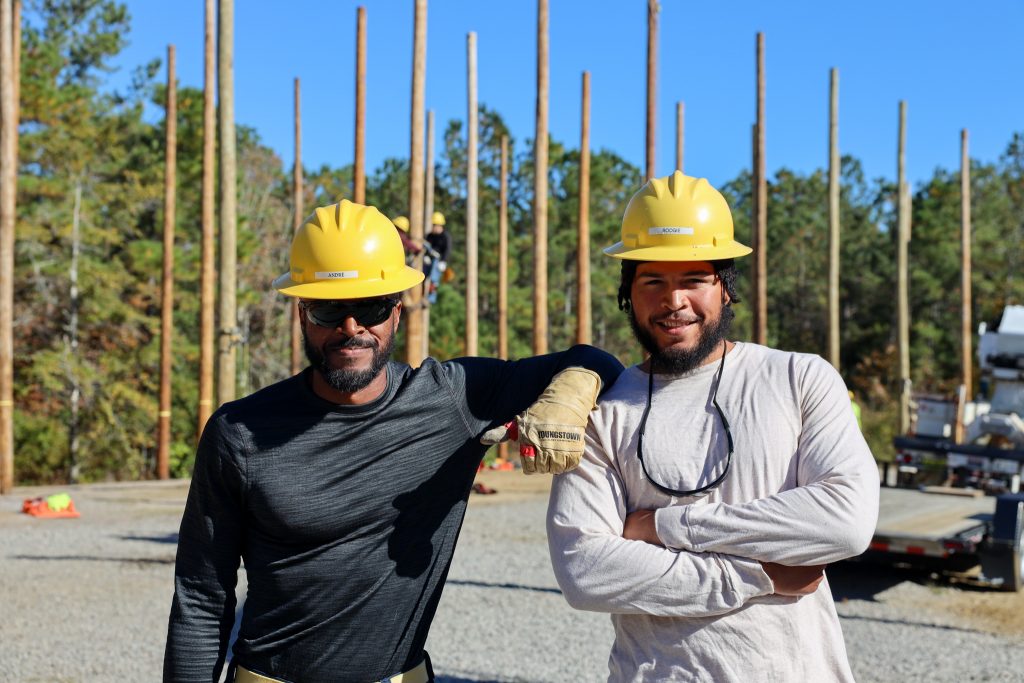 A Tale of Two Andres

Long researched his west coast options and found that even though Cape Fear Community College was located thousands of miles away, CFCC’s Electrical Lineworker program was the best deal on either coast. Long found that schools in California charge upwards of $20,000 for similar programs, but do not offer the depth of training and additional certifications in one program like CFCC’s program does. So, Long and his son, Andre Jr., traveled cross country to start their career training to become electrical lineworkers at CFCC.

CFCC’s program trains students to earn certifications in CPR and flagging, and prepares them to test for their Commercial Driver’s License (CDL). When Andre contacted CFCC’s Economic & Workforce Development director, Emily Holt, about the program, he was shocked to learn all of that was included in one 10-week session.

“Is this real? Is this accredited?” he remembers asking Holt. “My jaw dropped when she assured me the program is both real and accredited.”

Andre Long, Jr. likes to work with his hands. He was a wide receiver for the Ottawa University football team in Arizona until a knee injury benched his career. He finished his education at Ottawa University, but also knew he wanted a career in a hands-on trade. That’s when his dad told him about CFCC’s Electrical Lineworker Training program.

As a former football player, Long Jr. appreciates the teamwork that develops during training. He feels a sense of brotherhood in his class. But, the best connection for the father and son duo is the bonding experience they have shared. Traveling cross country together, working together, and supporting each other has enhanced their relationship.

Both father and son agree that the instructors are great and the quality of training is top-notch. They are impressed with the training equipment, too.

“Back in California, the equipment available to students is all broken down, and it’s difficult to schedule driving time for a CDL,” remarked Long Sr. “Also, in CFCC’s program, students learn soft skills that are just as important as technical skills. The program also teaches us how to interview properly so we’ll be prepared for the employer interviews following graduation.”

Safety is an important focus of CFCC’s Electrical Lineworker program. In fact, CFCC’s safety training goes beyond the national requirements. The goal of training drills such as “hurt man,” which involves rescuing an unconscious or injured lineworker (in the form of a 200-pound dummy) suspended from a pole, is to complete the task faster and safer than the national requirement.

Following graduation, the Longs will enter the workforce as entry-level lineman and continue to work toward earning their journeyman card.

To anyone looking to start the Electrical Lineworker program at CFCC, Andre Long Jr. has some words of wisdom:

“Give it a shot. There’s nothing bad that come from this and the instructors are great. They’re going to take their time and help you day by day.”

According to the Bureau of Labor Statistics, the 2020 median pay for electrical lineworkers is over $75K. Approximately 23,300 positions around the country open annually. CFCC offers graduates of the program job placement assistance and coordinates on-site interviews with employers for the students following the graduation ceremony.

Give it a Shot