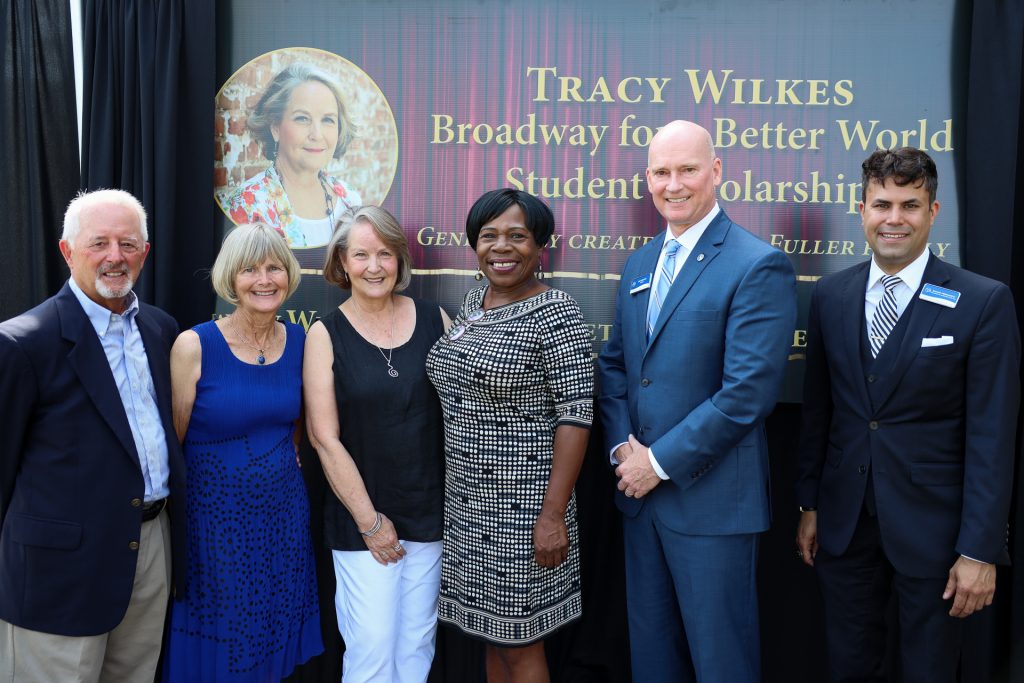 WILMINGTON, NC – The Wilson Center and the Cape Fear Community College Foundation are thrilled to announce the creation of the Tracy Wilkes Broadway for a Better World Student Scholarship. This new scholarship, endowed by the Fuller Family, was named in honor of longtime Wilmington youth activist Tracy Wilkes – who founded DREAMS of Wilmington to provide arts education and development to untapped populations in 1997, and was instrumental in bringing the Broadway for a Better World initiative to fruition.

With numerous state and local dignitaries in attendance – including North Carolina State Representative Deb Butler; New Hanover County Commissioner and CFCC Trustee Jonathan Barfield; Wilmington City Council members Kevin O’Grady and Charlie Rivenbark; CFCC Trustees Bill Cherry and Jimmy Hopkins; and members of the Fuller family — CFCC President Jim Morton welcomed those present and spoke of the importance of CFCC as a resource for businesses and the community of our region. Shane Fernando, Vice President of Advancement and the Arts at CFCC, stressed the importance of the impact of the Wilson Center on student education, and how the Broadway for Better World initiative has already directly impacted the lives of more than 1,400 citizens in just its first two years of operation.

Jack Fuller, retired CEO of GE Hitachi Nuclear and member of the CFCC Foundation Board, spoke about the importance of education and the arts, and the Broadway for a Better World program as a means of demystifying opportunities for higher education. Rhonda Bellamy, Executive Director of the Arts Council of Wilmington and New Hanover County, which administers the Broadway for a Better World ticket grant program, closed the remarks as she spoke about the impact that Tracy Wilkes has had on the youth of the region through her work at DREAMS, and how that work has had ripple effects through the arts community over the last quarter-century.

“Cape Fear Community College is excited to further the wonderful work of Tracy Wilkes and the Broadway for a Better World Initiative,” said Jim Morton, CFCC president. “We are so thankful to the Fuller family for their tremendous support of Cape Fear Community College and the arts in our region. Naming the scholarship for Tracy Wilkes is a wonderful way to honor her hard work and her passion for increasing access to the arts in our community.”

About the Tracy Wilkes Broadway for a Better World Scholarship

This scholarship is administered by the Cape Fear Community College Foundation; those who are interested in supporting the scholarship via their tax-deductible donations may do so at cfcc.edu/wilkes .