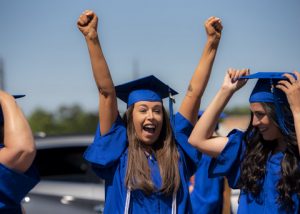 Wilmington, NC — Cape Fear Community College held a drive-in graduation ceremony at its North Campus on Friday, May 14, 2021, to celebrate the achievements of fall 2020 and spring 2021 graduates.

The ceremony included a commencement address from guest Mrs. Margaret Weller-Stargell, President and CEO of Coastal Horizons Center, Inc.; as well as messages CFCC President Jim Morton and CFCC Board of Trustees Chair Ms. Pat Kusek. Graduates had the opportunity to cross the stage to receive their credentials while their guests watched and cheered them on from their vehicles. The ceremony was live-streamed and recorded for guests unable to attend . 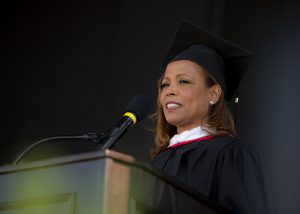 Jeb Sylvia: Sylvia plans to start his career as a hydrographic technician with SurvTech Solutions in Tampa, Florida. His focus will be on conducting surveys, using systems identical to those he trained within the program like the R2 Sonic and the EdgeTech 4125 side-scan sonar, among other sub-bottom profiling systems. Moreover, the experience he gained operating autonomous vehicles in the program will also be applied in his new job.

Taylor Holden: This Leland-native’s journey to college began with six months of Military training following her high school graduation. And then, as a member of the Air Force Reserves, she enrolled at Cape Fear Community College. With plans to go to medical school for dermatology, Holden chose CFCC for its affordability and convenience. “It’s helping me save money for medical school,” she added. Holden will take the next step toward her medical career by earning her bachelor’s degree from the University of North Carolina at Wilmington.