In life many things are left to chance, but I don’t believe me becoming a US Marine was one.

Ever since I was a child, I have had to Improvise, Adapt and Overcome. From the time I was put in multiple foster homes between ages 5 to 9 till the day I stepped onto those infamous yellow footprints on Parris Island, life has not been to kind to me, and my character showed it. This made home placement for me an issue. I was hyper-vigilant and very angry, which made for a ticking time bomb of problems amongst those who took the effort to make me part of their families. I just couldn’t fit in.

Along comes my 18th birthday in 1991, and I had to do something with my life, or I was most definitely going to end up in jail or worse. I chose to enlist into the Marines as that change. Little did I know exactly how much this decision was going to affect me for the rest of my life.

I had to wait almost a whole year before I could embark on this life-changing journey after enlisting on January 3, 1992. Then the day finally came. On November 13th, 1992, a Friday the 13th to be exact, I was put on the train from Richmond, VA, on my way to P.I.. Along the way I met a few of the lucky young men who would be sharing this journey with me—a random group from all walks of life heading in the same direction as me. Finally, I thought I had found some kind of family with this group of men. Little did I know how much of a family we’d become.

Boot camp was not what I expected, especially after watching Full Metal Jacket religiously the weeks leading up to my departure. It was hard and very interesting but lacked the aggressiveness I had envisioned. Nonetheless, I found myself a few months later joining my unit in the Fleet, which had me attached to 3/6 Weapons Co. Dragons Plt. I was now 0351 Anti-tank Assault men in the Marines.

Our first deployment found us doing a pilot rescue in Bosnia and then a stint in Somalia. In Somalia I felt the most fear I had ever felt in my whole life. Upon assignment to our temporary living quarters, we came under enemy fire from the high rises and motels just on the other side of a 10-foot concrete wall on that side of the airfield. We were told to not return fire but to stay hunkered down. Up above us the distinct sound of the M60 barked out an answer to the shots fired at us. I was frozen on my cot. I couldn’t even eat my MRE. Well, long story short, a lot of other things happened during our stay in Somalia that would haunt me for the rest of my life.

Fast forward to present day, and I am in college majoring in music at the age of 45 working towards an Associates in Fine Arts Music with my goal being to work in the music therapy field with veterans. Yeah, quite a turnaround from where I come from.

If it wasn’t for the US Marines, I might not be able to have the life I have today. The lessons I learned while serving made me a better person and allowed me the family I so needed to have. I thank the US Marines for allowing me the option of not falling into the black hole my life was becoming but becoming more than I thought I ever could be. 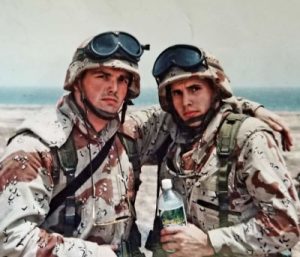 Mark is 45 years old and a medically retired US Marine who served between 1992-1996. Mark’s MOS was 0531 Anti-tank Assault Men, and he was deployed to Somalia in 1994-1995. He is majoring in music at Cape Fear Community College and plans on becoming a music therapist for veterans and a social worker