Home / Storyforce / Story Force VII / The Utility of Suffering Together

The Utility of Suffering Together

What do you give soldiers who are malnourished, sleep deprived, and intent on giving up? On that day, by some act of randomness or divine intervention, I chose hand sanitizer of all things. Ranger School has the uncanny ability of breaking you and morphing you from the top down. A weaker version of yourself is what you become. You are left changed and unrecognizable, mentally and physically, as if you were wearing a mask. Your mind becomes a structure of pure chaos, buttressed by fear and confusion. You will ultimately build this structure within your mind using only the weakest of thoughts, and a blueprint with no meaningful direction. As it turns out, when you build a structure on hopelessness and fear, it comes with an unstable foundation, low ceilings, and walls that close in.

In my third year of enlistment in the Army, I volunteered for Ranger School. Ranger School is a 61-day combat leadership course comprised of three phases wherein the candidates must demonstrate their ability to lead soldiers despite the lack of food, sleep, and ever-changing weather conditions. You could say it is like taking part in the most intense action movie where everything goes wrong and everyone gets to star in the leading role. The most notorious of all phases is the mountain phase. Even the most experienced and hardened soldiers pray and plead to the Ranger School gods to show mercy. The recollection of this phase still makes me shudder even after all these years. As the name implies, this phase is located in the mountains of northern Georgia. The bulk of folklore coming out of the school originates here. By this point in the course you or someone you know would have hallucinated, broken a bone, or even had physical altercations with fellow candidates. Who would have thought that a combination of starvation and sleep deprivation make for a volatile work environment? Naturally, I hoped that by some stroke of luck, I would make it through “mountains” unscathed and with a relatively unremarkable experience.

As day broke near the summit of the mountain peak, my squad of zombies began to rise from their frozen graves. We were lying in a row, face down, five feet apart, and with rifles at the ready. One by one the muddied, crystallized faces stared into the densely populated forest that surrounded us on all sides. Our only objective at that point was to pull security and await further instruction. Weeks of inconsistent eating, lack of sleep, and physical injuries started to plague us all. Some started to shuffle around like senior citizens, and you would wonder how they even made it up the mountain in the first place. Some developed the vocal cadence of William Shatner. Some were so filthy and irritable they hardly resembled the person they were at the start. The Ranger School instructor informed us of the temperature, about forty-five degrees, and that I would be the squad leader for the next mission. Forty-five degrees has a way of feeling like two degrees when you are constantly wet and bone thin. The mountain is seemingly punishing us for its own amusement. We felt like we were dying, and the instructors happily reminded us that, indeed, we were. My squad members looked dejected and gaunt, a mere husk of the soldiers they were when we started. Regardless, it was my turn to lead these walking corpses, and I did not know where to start. I reached into my rucksack in preparation for our next mission and happened upon a small bottle of hand sanitizer. The bottle was half empty and crumpled, having been repeatedly smashed against the countless other things in my bag. It could be said that even the bottle was on its last leg. As I looked down the row, each man was nestled against an old pine tree, stone faced and silent. The trees had taken on the role of prison bars, a reminder that there is no getting off this mountain. I walked down the row and began squirting small drops in each of their hands. To my surprise, they immediately began to apply it to their faces, and their faces began to change. Underneath their masks were baggy eyelids, stubbled faces, and at long last, a few grins. A warmth began to radiate from within them, a far cry from the chill we were experiencing on the mountain. It had an immediate and visceral effect on them that began to confuse and intrigue me. I began to remember that there was an individual underneath it all. By the time I worked my way to the end of the row, a crescendo of chatter erupted. A number of them began making future plans about potential restaurants they would be attending together. Someone mentioned to me that we should all grab dinner together after we graduated. As I recall, every conversation was centered on food, but it did not matter; at least we were talking. They were revived in a way. Day after day we started to become a part of the mountainous landscape we occupied, bitter and cold. We lost sight of each other against the pines and agitation. The fact that I could see their faces and all the pain and suffering they wore on them was oddly comforting to me in that moment. It meant that you were not alone in your suffering and that the burden of Ranger School, and to some extent the agony of life, was not a solo journey. Without mentioning a word about it, you knew that everyone felt exactly the same way you did. Nothing needed to be said anyway. The masks were gone; the part of us that still cared about our brother was exposed. We were motivated to start again and with a bit more clarity, not unlike our freshly sanitized skin. We were baptized in the aroma of alcohol and artificial additives. We washed our hands of our hopelessness, our pity, and our past transgressions. I still do not know what or why I grabbed that bottle of hand sanitizer, but it certainly made a difference. That bottle literally held the solution to a problem we never knew existed.

As I think back on that situation I am reminded of a George Orwell quote where he states, “He wears a mask, and his face grows to fit it.” He uses this as way of explaining how in time, we ultimately become the monsters we pretend to be. Likewise, we became monsters because we failed to acknowledge the fragility of humanity in each of us. In some sense our mask was literal, albeit mud. In another sense our mask was self-imposed and constructed through our own selfish and yet understandable acts of self-preservation. Either way, we made a choice not to acknowledge the man behind the mask.

At this point in time I guess I should reveal that I was trained as a combat medic. Though it was never discussed in any meaningful way, I was always under the impression that my squad thought I assessed our situation and made the right diagnosis based on what was presented to me. As we continued on through the course and went through more tough times together, some would later sarcastically ask, “You got any more hand sanitizer?” or assert that I was extremely effective at my job. This, of course, was not true. I was suffering just like they were, nothing more, nothing less. The irony is that hand sanitizer was a part of our packing list; in other words, we all were instructed to carry it with us throughout the course. The truth is I, too, had constructed that wretched structure of hopelessness and fear in my mind and wore that depressing mask. The solution was right in front of each and every one of us. I just happened to reach out and grab it. 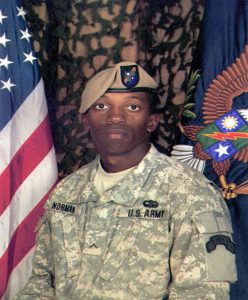