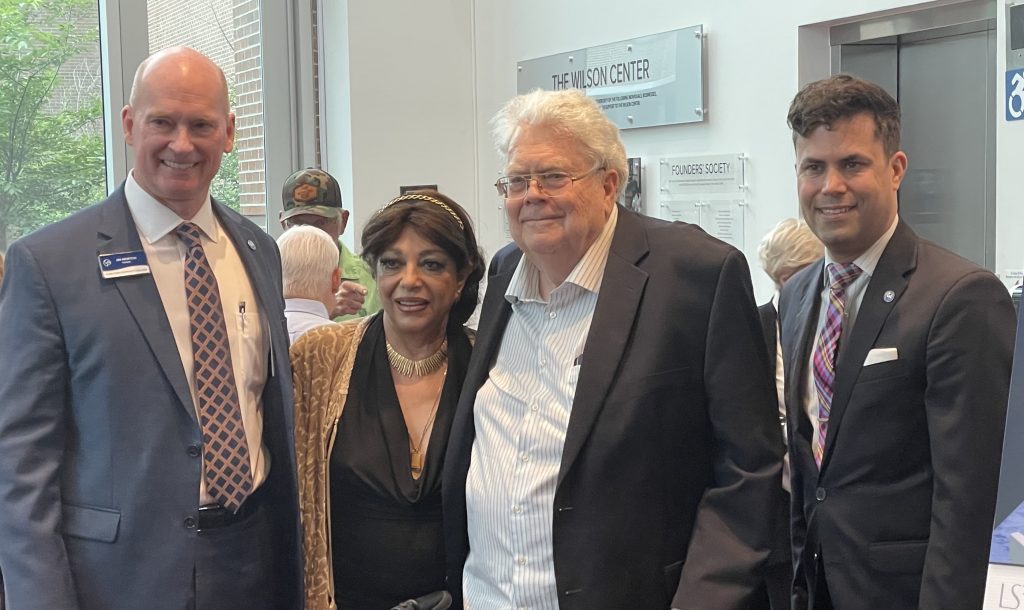 WILMINGTON, NC – Cape Fear Community College is thrilled to announce an exciting expansion to the Wilson Center. The development was announced at a special event held on Tuesday, June 22nd, 2021 from 6-7 p.m. The event, which was attended by local dignitaries, college officials, supporters of the Wilson Center, and local media, featured comments by Mr. Jim Morton, president of Cape Fear Community College, as well as Shane Fernando, Vice President of Advancement and the Arts. In his comments, Fernando announced the lead donors – Henry and Roya Weyerhaeuser – and their generous gift of $500,000 to initiate the expansion project.

The new addition to the Wilson Center, which will be accessible from the lower lobby of the building, will feature a special event space and donor lounge, as well as expanded student office space, expanded Guest Services facilities, lobby support space, and will re-locate Ticket Central to a more visible and accessible location. The expansion was designed by LS3P, the architectural firm responsible for designing the Wilson Center itself.

When the venue opened in October of 2015, the Wilson Center became the largest and most technologically advanced performing arts center in eastern North Carolina. It was designed to accommodate national Broadway touring productions, concerts, symphonic performances, recitals, dance productions, and more. The Wilson Center serves as a laboratory for student learning, with students working on every show; performing on the stage in CFCC Drama Department productions and local productions; and making use of the 26 instructional spaces as part of their learning journey. The building also houses a 108-seat studio/black-box theatre, which allows for a more intimate audience setting.

“Since the Wilson Center opened its doors to the community more than five years ago, we have welcomed hundreds of thousands of guests for Broadway productions, concerts, dance, comedy, commencements, and numerous other events,” said Shane Fernando, who has helmed the performing arts center since prior to its opening. “We are excited about this new expansion, and how it will allow us to move forward with both our educational and artistic missions. We are tremendously grateful to Henry and Roya Weyerhaeuser for their continued support of Cape Fear Community College’s Wilson Center.”

“Cape Fear Community College continues to grow to serve our students and community,” said CFCC President Jim Morton. “We are so fortunate to have the support of donors who believe in what we are doing at the College and the Wilson Center. This wonderful gift will enhance our ability to serve our students and our community. I want to sincerely thank the Weyerhaeusers for spearheading this campaign, and extend my gratitude to all those who will be involved in seeing this expansion come to fruition.”