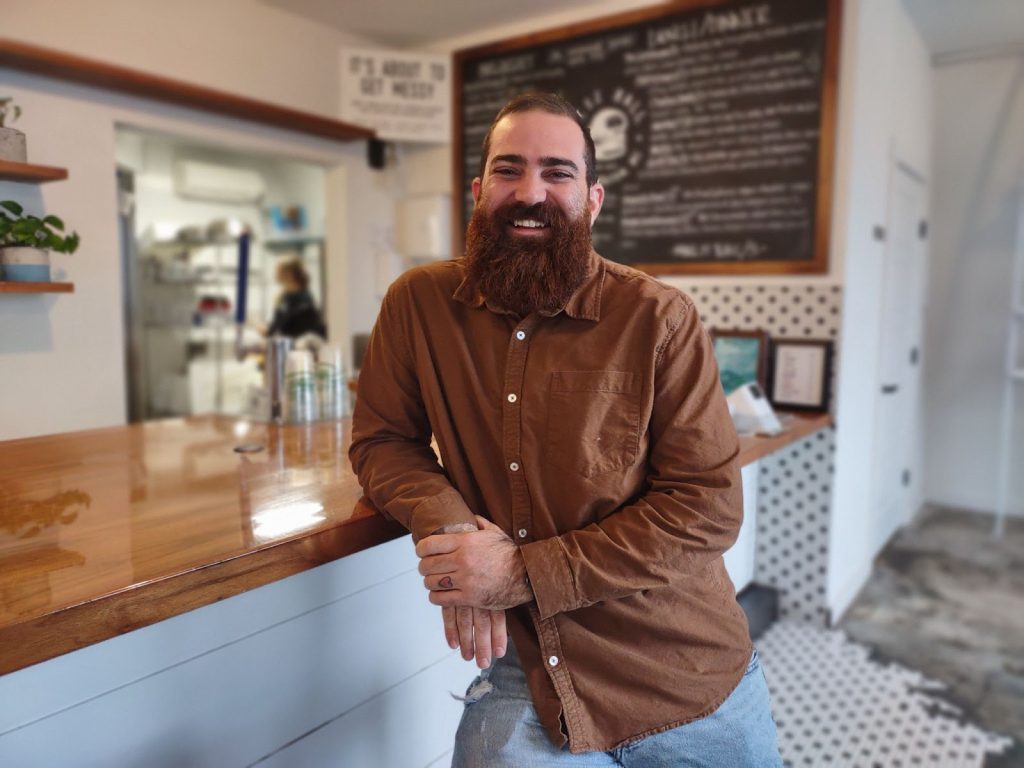 “There’s a lot of pressure on people to get a four-year degree,” said Sam Steger, local entrepreneur and CFCC alum. “I thought I wasn’t going to be successful without it.”

After a year at a four-year university, Steger decided to follow his culinary passion. Now he’s the proud and successful owner of Mess Hall in Wilmington’s Cargo District, which is already outgrowing its space.

Steger credits his mom for starting him on the culinary journey.

“I grew up cooking with my mom. She’s always been a really good cook,“ shares Steger. “As a hobby, I started getting more into it and experimenting with stuff.”

Through the encouragement of his mother, Seger decided to apply to Cape Fear Community College.

Transitioning to CFCC was easy. Steger expected it to be a grueling process, but he found the CFCC staff to be friendly and helpful. He recalls walking out of the financial aid office feeling stress-free and on his new path in CFCC’s Culinary Arts program.

Through the program, Steger developed cooking techniques and learned the business of running a restaurant. In addition to culinary skills, Steger learned purchasing, inventory, and cost control.

“We learned about product utilization,” Steger describes. “Basically, you go into a walk-in refrigerator, see what ingredients are in there, and then create a dish out of those items.”

Those lessons are important in his work today.

Additionally, other elements of the program helped prepare Steger for his career. For example, Steger earned his ServSafe certification while at CFCC. He also had the opportunity to earn class credit by working in an apprenticeship-type role under a certified chef.

“I have such fond memories of going through the program at CFCC, especially of Chef Lowers,” Steger reminisces.“It was such a cool time in my life. In the culinary program, everything finally clicked for me, and I knew I was doing what I was meant to do.”

From Employee to Restaurant Owner

Following his graduation from the Culinary Arts program, Steger worked at various restaurants including Casa Blanca. But he started feeling the pull to open his own restaurant.

“Originally, I was going to start part-time and prepare spices, rubs, pickles, and sauces,” Steger reveals.

But after a pivotal conversation with a regular Casa Blanca customer, Steger’s food truck vision became a dine-in restaurant dream. Later, the customer introduced Steger to a developer with available space in Wilmington’s Cargo District.

Even though Steger secured a stationary location for his business, he decided to stick with a simple menu of burgers and sandwiches.

“The more you do, the more potential of losing quality,” Steger says. “I want to keep the menu simple and do them all really well.”

This business philosophy is paying off for Steger.

Steger plans to relocate Mess Hall to a new, larger location on Wrightsville Avenue in the spring of 2022. Customers can still expect the same delicious burgers and tots. While there will be no container buildings, plans for the new location include a dog park so diners can let their furry friends tag along.

“I’ve talked to so many people in the community about the dog park concept,” Steger said. “They all love the idea and can’t wait to bring their dogs and let them run around while the owners eat and drink.”

For those considering attending CFCC, Steger recommends thinking about what you actually want to do.

“Even if you are not sure what you want to pursue, go in with the attitude that you want to learn what is being taught,” Steger urges. “Challenge yourself to get the most out of your investment. And remember that the faculty and staff at CFCC are there to help you succeed.”