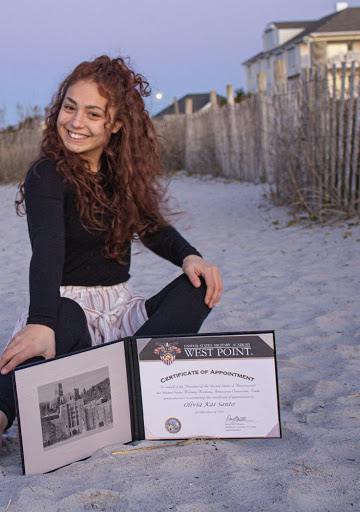 In a few short months, years of hard work and determination will pay off for CFCC Early College Student Olivia Santo as she begins the next chapter of her life at the United States Military Academy at West Point.

Santo recalls the exact moment she was appointed to West Point “I was on my way to a swim meet this past January when I found out I was appointed. I was so happy.”

“The military has always been part of my life. My grandfather and great grandfather both served. It was not a glaring choice to me at first but when I started learning more about the opportunities West Point offered, I had my sights set on the academy. West Point became my number one choice.”

West Point admissions are extremely selective with an acceptance rate of 12%. The process for acceptance to West Point is quite rigorous; Santo spent almost a full year on it alone. “It involved seeking out a congressional nomination, multiple interviews, completing several tests, including a medical exam, a fitness assessment, and essays. I received my congressional nomination from Congressman David Rouzer.”

Santo will graduate from Wilmington Early College High School (WECHS), a partnership between New Hanover County Schools and Cape Fear Community College to provide students with an opportunity to earn an associate degree along with their high school diploma. Santo will graduate with her Associate in Science, as well as a Business Project Management Certification.

“My WECHS and CFCC instructors were influential in my educational journey. They pushed me to be the best version of myself, supporting me and cheering me on. They wanted me to come to them with my questions and struggles. They taught me to advocate for myself and take initiative.”

Santo will leave for basic training in June and will be officially accepted into the Corps of Cadets in August. She will graduate West Point with a Bachelor of Science degree and the rank of second lieutenant, then head straight into active duty.

To anyone considering early college or the dual enrollment route, Santo says to do it. “Not only will it bolster your resume, but it will also give you great college and life experience to continue on your educational path.”