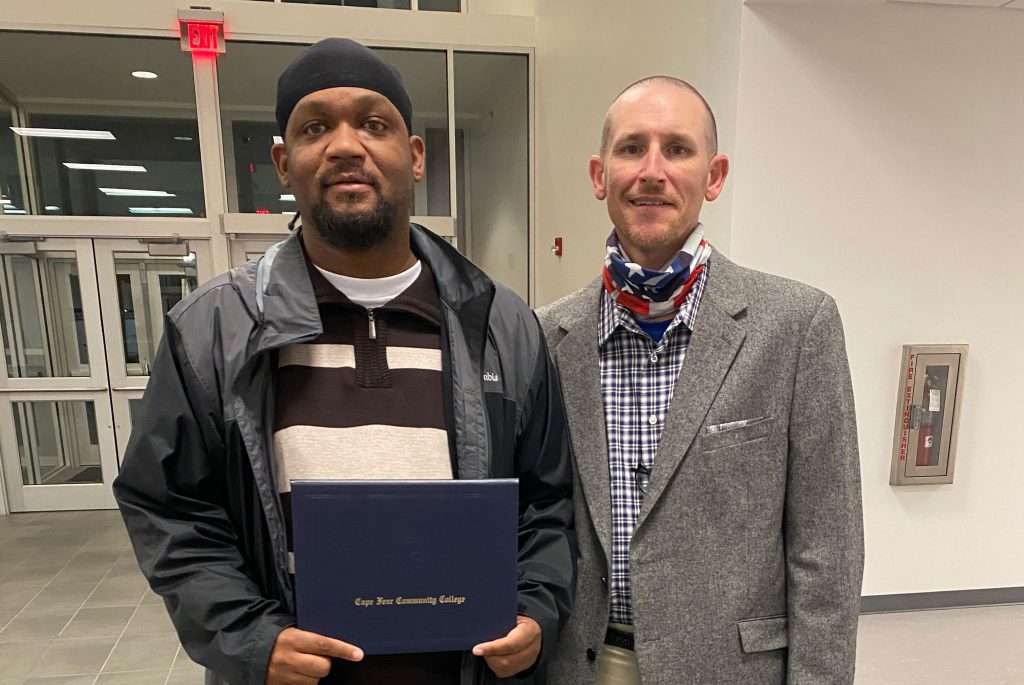 Terrence fell in love with truck driving at age 21 while employed as a driver’s helper. Terrence’s colleague nudged him to give driving a try. And although at first intimidated at the prospect of driving a 24-foot box-truck, Terrence’s mind was set his first time behind the wheel.

Despite Terrence’s determination to obtain his CDL, his dream didn’t happen as quickly as he had hoped. Each time he focused on earning his CDL, his family grew. Over the years, the need to provide for his growing family had Terrence working in the military; for the fire department; and as a roofer—where a roof collapsed beneath him, broke his pelvis, back, arm, and hand. His injuries were so severe that he had to learn to walk again. But always, in the back of Terrence’s mind, was the desire to be a licensed truck driver.

Terrence, now 40 years old, discovered CFCC’s new short-term truck driver training program where he could earn his CDL in less than a year – at a fraction of the cost of other truck driving schools. Terrence graduated from the program in November 2020 and in less than a month has had three job offers.

It was a dream come true for me. I was in the process of giving up. I feel like I have a career now. This career will help me take care of my family financially. There are different opportunities I have now where I can have time with my wife and kids.

“Terrence gave 100% each day no matter what task was given,” said Chad Hall, CFCC truck driver training instructor. “It was an honor to get to know Terrence, with his determination, he will succeed in his dream within the truck driving industry.”

Terrence’s advice: “Don’t ever give up. That’s the key right there. If there’s something you really want, just keep driving and push towards it. Stay focused and keep pushing. If you want to obtain your CDL, Cape Fear is the way to go. It’s affordable, you’re getting top-notch training, and it’s a great and rewarding learning atmosphere.”

Get started on a rewarding career in truck driving today!