I joined the Marine Corps in October 2011 without looking into any other branches. I was sitting at home working random jobs for a hiring agency. My friend had just graduated boot camp the year before and was my influence to look into the Marine Corps. He gave me the recruiter’s number and told me if I had nothing going on to talk to him. I was sitting in my room in the middle of winter when I was living in Nebraska and decided to give the recruiter a call. I signed the contract to begin my enlistment as an avionics technician.

At the time, I had no clue what avionics was, but I figured it had something to do with aircraft. I was expecting to be a mechanic and that I would wrench on helicopters. After I finished Marine Combat Training, I later found out that was not the case. I began school in Pensacola, Florida for electronics training. It was at that point I realized that avionics meant aviation electronics, and I had a face palm moment.

I finished up electronics training and went to my MOS school to learn how to maintain and troubleshoot avionic equipment. I finished school and was hoping to get orders to California, but as the chief instructor started naming where the Marines are going to be stationed, I was still hopeful. As soon as he got to my name, my heart dropped.

He yelled out, “Hernandez, you’re going to Jacksonville, NC to be at MCAS New River.”

I felt like that was the biggest heartbreak in my life at the time. My roommate at the time had the same orders, and we both looked at each other with sad eyes, almost as if our dog died or something. Through that disappointment, I kept moving forward and got to my duty station with an open mind.

This was the first time I was on the East Coast, and I knew nothing about it. It wasn’t long before I started making friends in my unit. But the most infamous place to meet the people in your unit was the smoke pit. The smoke pit was the designated smoking area for Marines to smoke as well as a place to crack open some cold ones. I was never a smoker and never picked up smoking, but the smoke pit was the place to have some fun on base. It was many times referred to as “club smoke pit.” Friends were made and friendships were tested, but at the end of the day, everyone would become brothers. I was only there for the second-hand smoke and the good times. 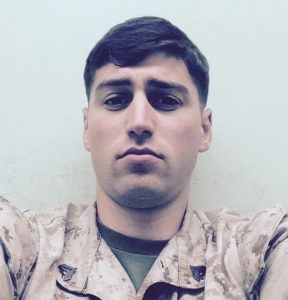 I served in the Marine Corps for five years. I was an avionics technician for MV-22 Ospreys. I troubleshot and repaired avionic equipment, and then I troubleshot circuit cards. After I was promoted, I began to run my own work center. Our work center number was 69Q, and we became known as the 69 Quails.