Heat of the battle. The fight had begun. Thoughts raced through her mind. She wondered, “Will I win this time? Will this be my last battle?” Her strength was waning. Another strike to her body, but she was so beaten and bruised already, and her body was in so much pain, she couldn’t tell where the blow had struck her. She breathed in and out slowly; time seemed to move in slow motion. Another blow, this time to her chest. She couldn’t breathe; she gasped for air. All around her was nothingness. She turned and looked for any sign of life. Nothing.

Another strike, this time to the side of the face. The force felt like a giant beating her into the ground. She flew sideways, landing on her hip and shoulder, hitting her head on the hard ground beneath her. She looked toward where the hit had come but saw nothing. “Is this it for me? Should I just give up? Is this going to be my last stand?” she asked herself. “No,” she thought, “this can’t be where I go out. I have to make my stand, no matter how hard or how badly it hurts!” She kneeled, praying a silent prayer for strength and forgiveness. She raised her head and began to stand to her feet. She did not know what was going to happen, but she knew she had to keep fighting, even if she was alone.

She turned and was met by yet another hit, right to the face. She fell, landing on her back this time. She looked up and realized she was trapped in a cage, like some crazed animal. There was no door, no way out. “Where did this cage come from?” she wondered. “Why didn’t I see this before? Has it been there all along?” She struggled to her feet, determined to keep going, to not lose this time.

The fight waged on; it felt like years. The hits kept coming. Her strength couldn’t hold out any longer. “Why do I keep getting up?” she asked herself. “Wouldn’t it all end, if I just give up? I don’t think I can last any longer. If I just give up, it’ll all be over. I can’t go any further; I can’t get up again. I just can’t.” She could feel herself giving up, her body stop fighting, her heart slowing, her mind fading. The beatings had taken their toll.

She was bloody, bruised beyond recognition, beyond all hope. The light around her began to fade; everything around her began to blur into a kind of non-existence. She prayed for it all to end, for her existence to end, for the pain and anguish to all end. The hits kept coming, faster and harder now, but she couldn’t process any more pain. She was beyond the point of being able to move or defend herself now. She began to let it just come, knowing nothing would make it stop; nothing could make the pain stop.

Suddenly, a figure blurred into her view. She thought it was an angel coming to take her away. Then, she looked again. “No,” she thought, “no one would come for me; it must be death coming to collect me for hell.” She looked again. Closer now, the figure was becoming more visible. She could make out the figure of a man – light-skinned, handsome, but the light behind him kept her from seeing him in full view. Another hit to her stomach made her gasp for air.

The figure came closer, until he was in full view. He kneeled beside her. “But how?” she questioned. “How was he able to get through the bars of this cage, this prison in which I have been trapped for so long? How did he find the door, when there wasn’t one?” She was certain that she checked and didn’t find a door in her time trapped there. He touched her bleeding, broken face and smiled. “Come with me; I have come here for you. I have been searching for you my whole life. You are so beautiful,” he said, still touching her face ever so slightly, gazing upon her with more affection than she had ever known existed.

He grabbed her arm and put it around his shoulders, lifting her out of the pool of her own blood, his arms so gently but firmly supporting her broken body. She looked around, surprised to see the bars disappearing before her very eyes. She looked at him, afraid he might be part of a cruel dream, but he felt real. She stood but couldn’t move. He saw the pained look on her face, felt the pain shudder through her body. Without question, he swept her into his arms.

As she held on as tightly to him as she could, she looked for the captor, the one who had kept her imprisoned for so long, but she saw no one. She wondered if her rescuer had done something to her captor, but there were no marks on him, no sign of struggle. He was just there to get her, to carry her out of her prison. As she looked back, she saw a glimmer shining all over the ground. Shattered glass was everywhere. It was then she realized she was the prisoner and captor in one. She had been beating herself up for her past for far too long and built the glass mirrored walls around herself. All he simply did was see past her self-made prison and break down the barrier she had created.

She gasped at the horror of the atrocious thought and began to cry. “How could this have happened? How did I do this to myself?” she wondered, aghast at the destruction she had brought upon herself. Feeling her sadness and pain overwhelm her body, he held her closer. “I am here now; you have nothing left to fear. We will walk through this life together, through the good and bad. No matter what life brings, I will never leave your side.”

With his words to comfort her with more hope than she had ever felt before, and his embrace to make her feel loved more than she ever thought possible, she laid her head on his chest and finally fell asleep to the gentle beating of his heart. 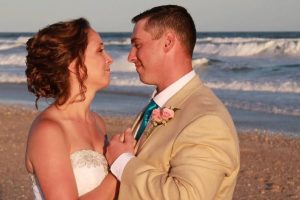 I grew up in an Army veteran home my entire life, having had a dad and a step-dad both formerly in the Army. My step-dad served in the Korean and Vietnam Wars, and my dad served during the Vietnam War. Now, I live in North Carolina with my husband, who is also an Army veteran, and our two children. We love to spend time on Carolina Beach, going to the range together, and watching movies as a family. Luke and I are both enrolled at Cape Fear Community College and plan to transfer to the University of North Carolina Wilmington in 2020.