It is another early morning as the Marine takes his uniform out of the closet. The pride begins to set in as he takes a step back to slowly inspect the gold medals that are placed on the uniform. His gold buttons with eagles are shining as he wipes the blemishes off. He looks closely for any fabric that may be sticking out so that he can cut the IP to make his uniform perfect. The pride of his uniform is what he learned from boot camp, but the families that he is honoring are the reason for his attention to detail.

This feeling wasn’t normal… the flashbacks of headstones became real in the green grass filled with morning dew. However, in this particular place, there wasn’t green grass; it was crusted sand where the blood seeped through.

MARINE did you read my last?

It was PFC Currier, 2 friendly WIA (wounded in action) it was CPL Smith and PFC Horne. The Marine’s heart sunk deep into his chest as he relayed the transmission to his command. It became REAL… it was war, and his fellow warfighters were dying.

Another morning in Arlington National Cemetery, in the cold weather as the dew becomes iced on the green fields as far as one’s eyes could see. The sound of Marines marching down the road as the drums lead the cadence. In the distance, a group of people dressed in black or in their dress blues, gathered around an empty hole. A hole where many of his fellow brothers and sisters would rest, forever. As the Marines approached the area where other headstones were erected, all of the Marines faced the family and friends as the command was ordered. Tears are rolling down the faces of the people dressed in black. Facial expressions of the ones dressed in their uniform cringe as they hold back their tears. Another command given, and the loud sound of three gun shots filled the air.

MARINE, the birds are inbound, 10 mikes.

Rounds continued to crack by as the warfighters in their bullet-proof vests and tan uniforms returned fire. The Marine informed them that friendly warfighters have died and are wounded. After the warfighters heard the news, there was a different look in their eyes, the type of eyes that are now seeing, only RED. The Marine looks at all his warfighters as they take the fight to the enemy and has flashbacks of the people dressed in black. As the night died down, he gathers the leaders of his squad and lets them know to check the welfare of their warfighters and to be ready for another day of bloodshed. The Marine observes his warfighters as they begin the preparation for a sleepless night on the cold ground in Afghanistan.

After the sound of the three gun shots, the playing of the trumpet began to make the tears flow like rivers to those that surrounded the hole that was about to be filled. Six Marines raised the wooden casket as the final honors were given, and then the casket lowered to the ground. The American flag draped over the casket was now folded into a triangle. A high=ranking Marine takes a knee in front of the family and presents the American flag to the widow. Tears rolled down her face as she accepted the American flag in that green field where honest men and women sacrificed their lives for their country.

Like many, in the past and present, the American flag continues to be carried or given by one wearing the uniform. 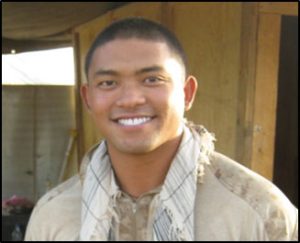 Ray Charfauros served in the United States Marine Corps from 2006 to 2013 before receiving medical discharge. While attached to Marine Barracks 8th and I, Washington, DC, he served in the Marine Corps Firing Party (21-gun salute) at Arlington National Cemetery and on the Dover Team, performing dignified transfers for the Fallen. While stationed at 3rd Battalion, 6th Marines, Camp Lejeune, Ray was deployed twice to Afghanistan where he served as a squad leader in the Battle of Marjah, the largest U.S. helicopter assault since Vietnam. Ray has received the following personal awards: Navy Commendation Medal with Valor, Navy and Marine Corps Achievement Medal, Good Conduct Medal, and Combat Action Ribbon.

After graduating from CFCC and UNCW, Ray was employed as a Veterans Service Officer for Pender County, NC, and is now CFCC’s Veterans Coordinator. Ray is active in the Veterans community serving as a DAV Chapter Service Officer, board member for the Coastal Carolina Community Veterans Engagement Group, committee member of the Cape Fear Purple Heart Dinner, and NCDAV board member.