CFCC student grooms a part-time passion into a profession 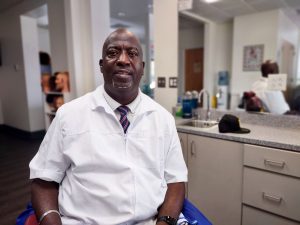 Jeffrey Nixon enjoys cutting hair even though his clients have been limited to family, friends, fellow troops, and federal inmates. However, Nixon’s clientele is getting ready to expand. After his October graduation from CFCC’s Barber School, Nixon plans to set up shop at JR’s Barbershop in Hampstead, turning his passion into a full-time profession.

“I grew up in a household of 10. My mother worked hard all her life to keep food on the table.” Nixon explained. “I recall when I was 12 years old telling my mom that if she bought some Wahl clippers for me, I would learn how to cut my hair. Then I wouldn’t have to wait so long for a haircut. Low and behold, she bought the clippers for me, and it wasn’t long before I was cutting everybody’s hair. I started earning extra money, and my passion for cutting hair began.”

For Nixon, the pathway to a rewarding career has not been an easy one. Nixon readily shares that he spent time in federal prison. Upon his release three years ago, he tried construction work but ultimately found the work unfulfilling. He missed cutting hair and the social aspect of barbering.

So, Nixon signed up for vocational rehabilitation with the North Carolina Department of Health and Human Services. Through the program, Nixon received assistance to pay the initial costs of barber school at Cape Fear Community College.

Despite challenges along the way, Nixon persevered. ”It was very important to me to follow this route because I didn’t want to keep repeating the same cycle,” he said. “My whole purpose of coming to CFCC was to learn and not make the same mistakes.” 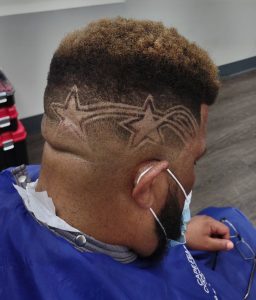 Then, in December of 2020, Nixon experienced another setback. While hospitalized with COVID, he had a medication-related allergic reaction which resulted in more health complications for Nixon, but thankfully, he pushed through to recovery.

Nixon’s tenacity to finish the program is inspiring others. His nephew, following in his uncle’s footsteps, decided to enroll in the barber program. Nixon’s heart swells with pride, and his eyes tear up when he talks about his nephew following this path.

“Setting a goal is one thing, but achieving the goal is the hill to climb,” Nixon offers. “It never comes without hard work, and that’s what others are seeing me accomplish.”

CFCC President Jim Morton had the pleasure of meeting Nixon and listening to his story.

“Mr. Nixon’s story is what CFCC is all about,” Morton said. “We want to meet students where they are, and help them get to where they want to be. Mr. Nixon overcame obstacles and worked hard to achieve his goal. I’m so glad he enrolled in our barber school, and I wish him continued success.” 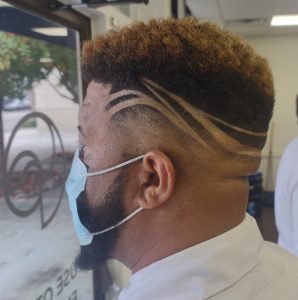 Nixon feels excited and equipped to launch his barbering career. “My instructors at CFCC taught me so much more than how to cut hair. They taught me how to be professional. And that I am in control of my destiny,” Nixon grins. “I can’t wait to know what it feels like to be behind that chair.”

CFCC’s Barber School offers a full and part-time program in the fall, spring, and summer semesters.