“I’ve always been small, I’ve never been the strongest at anything, I’ve always had the mentality that if I wanted it enough, I could do it. Do the work yourself, don’t count on anyone else. You shape your own destiny. You might have a helping hand along the way, but they can’t put the work in for you.”—Kaitlin VanMeter

Neither Kaitlin’s size nor gender stopped her from pursuing a career as an electrical lineworker. While Kaitlin’s classmates were roughly three times her size and all male, Kaitlin’s mental strength, attitude, and dedication to learning the trade landed her three job offers.

On the hunt for a new career after her food industry job was affected by COVID-19, five-foot-two, 100-pound Kaitlin VanMeter discovered CFCC’s electrical lineworker program. After researching a career as a lineworker, its benefits, and the earning potential, Kaitlin was hooked. The clear path to advancement through the nationwide apprenticeship program—with its guaranteed wages and pay increases—was to Kaitlin an exceptional opportunity to take care of her family. Needless to say, Kaitlin looked no further.

Although the training sessions involved strenuous exercises (like rescuing a 200-pound dummy from a pole string 30-feet off the ground), Kaitlin persevered. She developed a mental toughness early in the program. She knew she would have to work hard; she went to the gym to build up her strength and took in all she could from the instructors. Kaitlin was of the mindset that if “you put your mind to it, you can do whatever you want.” 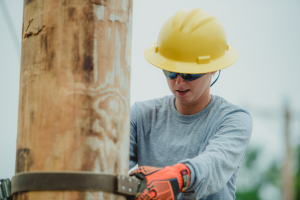 Through her own grit and the encouragement of her classmates and instructors, Kaitlin successfully completed the program. Upon graduation, Kaitlin received three job offers from well-established companies. She accepted an offer from River City Construction.

Now employed as a groundsman, Kaitlin’s primary role is to equip the lineman with the proper tools and equipment out in the field. Kaitlin entered the workforce making over $18 an hour, 40 hours per week and will continue to receive raises every six months as she makes her way to foreman and lineman. After 7000 hours (350 of which were completed in CFCC’s electrical lineworker program) Kaitlin will be qualified to become a journeyman — where the earning potential is well over $40 per hour.

As for right now, Kaitlin is focused on being the best groundsman she can be, learning as much as possible. To individuals considering the program, Kaitlin says “sign up and try it. Any other lineman program is going to be much more expensive. You can find out if this is something you want to do without putting yourself in debt.”

To women considering the program worried about being a female in the trade, Kaitlin says,

Considering a career as an electrical lineworker? Learn more today.